All in a matter of time, sentiments had been changed, Investors who once bet on winners of tomorrow, now viewed their investments as businesses with little potential and wondered about their investments viability, all this made them to wonder how they were sucked to believe in companies which were little more than an actual dream and what had made them to part with hard earned investments.

One by one, Audits were called on companies and this had exposed many incidents of inappropriate accounting practices. One such case was that of ENRON whose shareholders saw their investment value turn to zero from a corporation who commanded over a couple of billion dollars in market valuation a few months ago.

Similarly Grow Big Fast companies and those with claims of technology revolution of tomorrow were now been checked. Everyone was been questioned and no single organization was spared.

The media attempted to make sense of it all and began turning and exposing their once darling companies who began to look shackled from the inside, one by one they brought them to the public courts, where the markets started to decide their fates.

FEB 01 2002 / MSNBC reports how the Mississippi giant WORLDCOM has done nothing with public money except buy over other phone companies, this is been done over the last 19 years with over $100 billion of investors money over the course of the 1990s, this $100 billion Mont Blanc of waste has not been able to generate a single dime of net new cash for the business

Even more so, the companies that were put to check, their auditors and accountants too were not been spared. The Investor were angry and as the information got exposed further, their emotions were now turning to fear. They realised that they couldn’t trust anyone, anymore and specially after the Enron debacle where the auditors and accountants of the company had a moral responsibility to keep management in check and protect investors interest, but in fact they had probably a role to play, to sucker the public investor.

In the case of Enron, it was uncovered that Anderson consulting had failed to exercise their responsibilities as the auditors of Enron and was in the process of been indicted by the US government on charges of obstruction of Justice, it was also further noted that Anderson employees were responsible for shredding important documents that could throw light on the entire Enron saga and the reasons behind its collapse.

All this brought struck more fear in the hearts of the corporate giants and Anderson who was one of the world top five accounting firm lost almost all of its clients to rival companies and was on the brink of bankruptcy itself, all this occurred from Top five to ground zero in a matter of months.

The free lunch was over and the fearful phrase had begun. Venture Capitalists, Governments, Investors and employees were now asking questions and they were more than serious than ever.

The tides had changed and the pressure was on for performance and growth in terms of real revenues. Once acclaimed Silicon Valley Venture capitalists were now been brushed aside, as their greed had got the better of them and with their downfall, came the fall of rookie VC firms, who had joined them on the move to the upside.

Their losses had tripled and survival demanded writing off portfolio companies, companies that were unable to provide decent returns (+1000%) that they had once hoped for. One by one they squared off their positions and now wondered about basic survival.

Like a bear in hibernation, they survived on capital management fees and turned themselves into consultants, offering their services to governments or anyone else who was interested in the venture capital business.

The smarter ones bought back their companies remaining shares and took full operational control of their portfolio companies, while some did so to take control of the excess cash flow in those firms, others reckoned that they had a better chance to turn around the situation and fight the game till the last.

It was a time where been a public company became an unnecessary burden, issues of corporate reporting, due diligence and public demand for better performance was just too much of a hassle for the management of these firms, and such firms chose to de-listi being a public company and returning whatever shareholders balance capital was left.

Then Suddenly with a a twist, it seemed like a bad economy, a falling stock market, tough business conditions and tighter consumer spending was just not enough and something greater was required, On September 2001, Terrorist attacked The World Trade Centre building in New York, crashing the huge 110 storey building with jumbo jets, the terror attack was the single greatest attempt of war on free America in History and this made stock markets to plunge everywhere driving fear greater into consumers, investors and everyone else hearts. 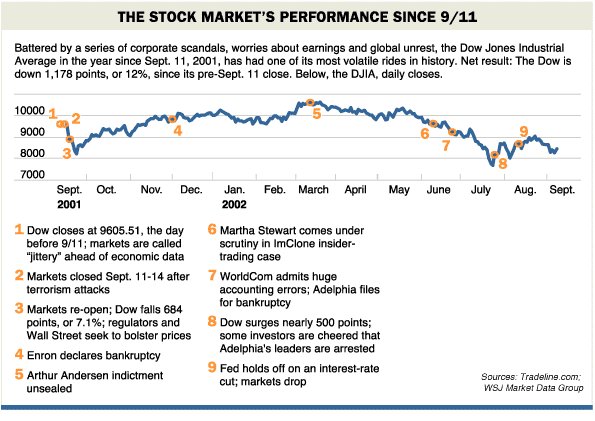 This event further accelerated the bearish sentiments in the markets and the game of valuations had now really turned bad, technology was questioned and its benefits and build up were doubted.

The Enron saga had by now fueled investigations into many companies, technology related as well as traditional, companies such as Andersen, Martha Steward, WorldCom and Adelphia were the few that begun to expose the tip of a greedy iceberg of the dot com rush.

Technology bullish Governments who had had invested alongside with VC’s firms into technology and into buildup of heavy infrastructure projects replicating Silicon Valley in their back yards were starting to awaken by their losses.

Not just with their losses, Governments had other more issues to worry about as well, for they had seen capital been sucked out of the economy, for their taxes and collections were not the same anymore and the wealth effect had died down. In fact the entire economy was suffering and most importantly the internet revolution had given everyone this great dream of success, which upon not been fulfilled, it was creating a negative effect in the minds of workers and driving productivity down.

Companies scaled off workers and trimmed off the excesses for their paths towards profitability, National unemployment rate inched higher and in a classic chained event scenario, it had affected everyone.

For the government, if they were a company, it could have been easier going into liquidation, but for them they were left with very little choices but to continue investing and as money dried up from all sources, the only ones left were government funds whose agenda was set to stimulate the economy by spending more money and by building up new age enterprises.

The motivation for them was simple, diversify from previous core revenues streams as reliance on some form of manufacturer, physical goods exporter or old economy corporation may in the new economy not be sufficient and shifting into technology sectors was strong, for they had already seen and identified its benefits.

The only troubling question is ‘Are we ready for Technology as we know Technology is ready for us’. There are many good technology companies out there today and most of them are deep repentance, be it good or bad, the key now for most was to identify the real from the fake and choose from the survivors of today as the winners of tomorrow.

The bust now has already exposed salesmen’s who were disguised as technopreneurs and for their own shame, they had shamed the name of all. Their objective was simply profit, their objective was personal gain, for they had looked to capitalize on the saying, every day a fool is born and they said the market doesn’t peak till the greatest fool of all has bought.

A state of fear had grasped the economy. People, processes and products were becoming obsolete. Businesses were seeing their revenues disappear and large corporations are in a deep trouble, for them they are unable to understand what used to work before and why doesn’t that work anymore. They wonder why we could grow year on year before and why it is different this time around.

With this fear, everyone is restructuring and learning and with this they have derived the motivation and strength to take risks and change. It was fear in its earlier days for Israel that that to become a powerful force in the middle east from its humbler beginnings, similarly it was fear which made Singapore a technologically advanced and prosperous country greater than their parents Malaysia and this time around it is again fear that is creating the whole new wave of opportunities, that only a few will ever envision and profit from.

For Technopreneurs, they were many, many were indeed hopefuls, hoping for the market to turn so that their investors and companies could go public, the truth was they were still hoping for a free public lunch, while the window opportunity for it had long been closed.