Value creation sounds so abstract. The kind of stuff management consultants and gurus pontificate on. But creating value is a concrete concept. It is very important to the survival and prosperity of the business. It is best illustrated by what Amazon did to the book distribution and retailing business (see Figure 6.1 and 6.2). 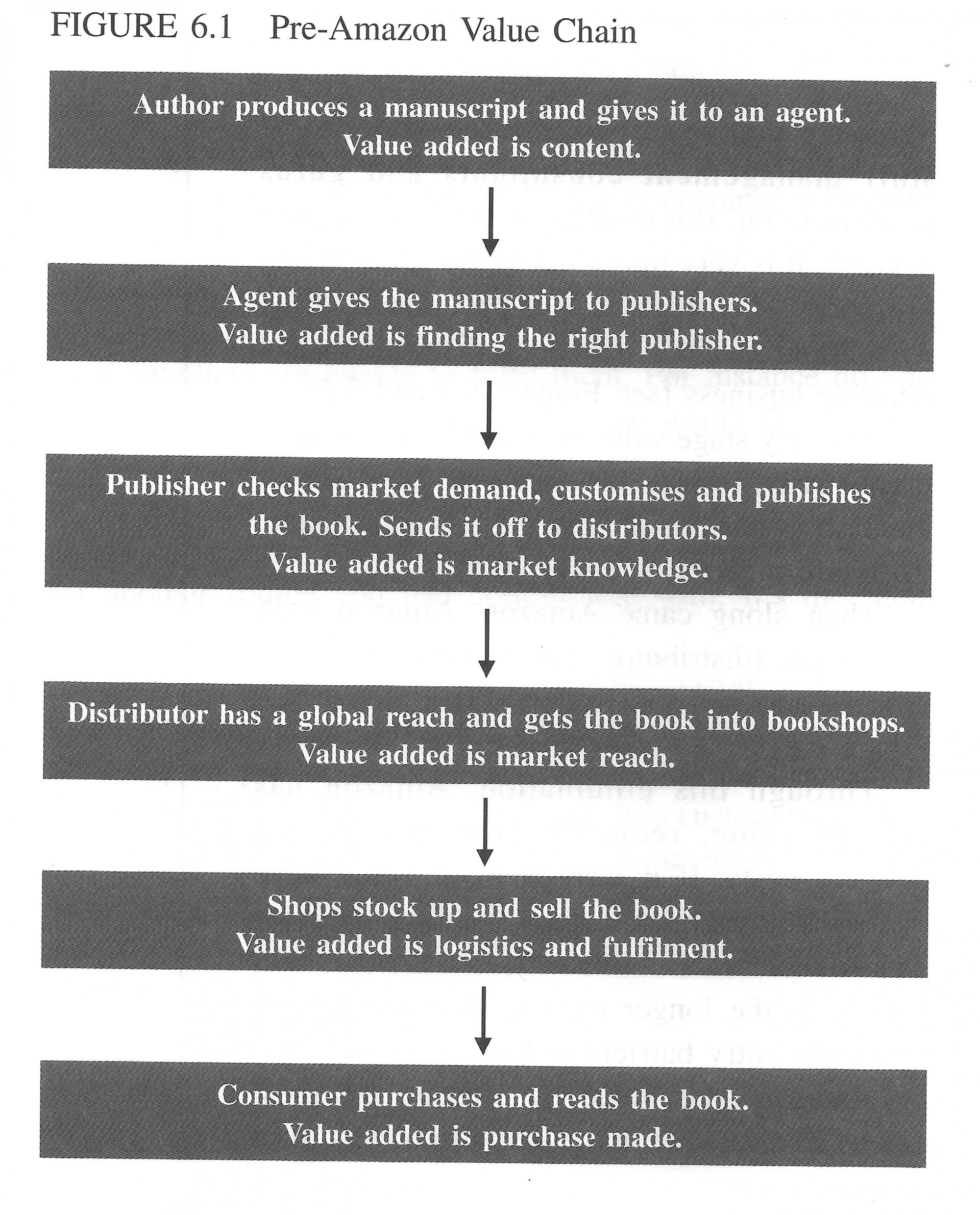 Atevery stage value is added in the form of productivity, service, efficiency or sales. Hence the term “value chain“. But there is a downside. Costs are incurred at every stage.

Then along came Amazon. Amazon took two stages (distributors and stores) out of the process and inserted itself in their place (see figure 6.2). 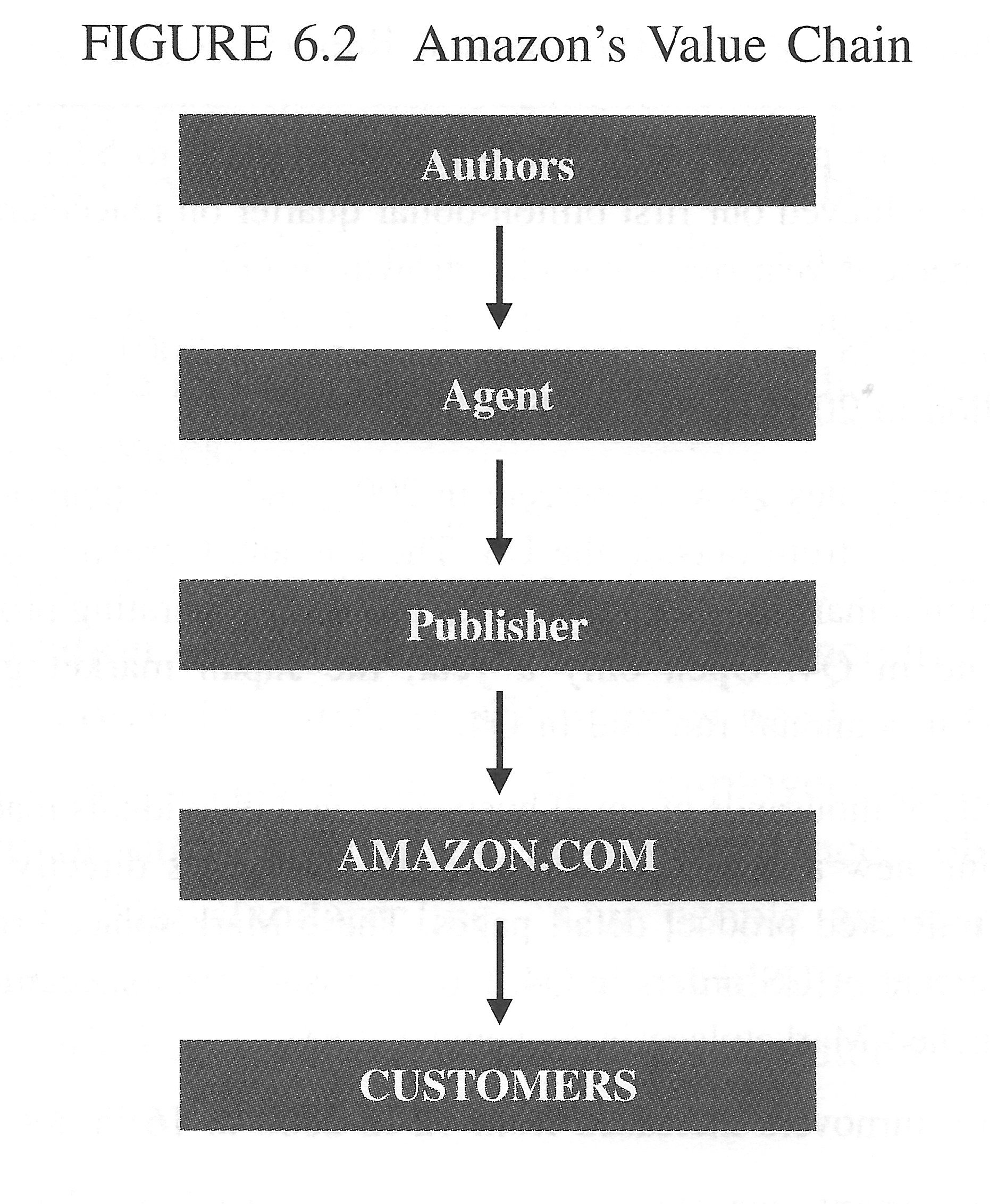 Through this elimination, Amazon has created value, reducing bok prices and delivery costs. If it wanted to, it could have increased its margins instead, creating value for shareholders. But this week, shareholders will benefit in the longer term as Amazon further raises entry barriers to this business.

Amazon adds value by offering the most extensive catalog in the world to buyers from all over the world. If you have Internet connection, you will have access to this catalog. In the process, it gathers a massive amount of customer information creating a substantial competitive advantage for itself.

The customer database is further enhanced through the use of data mining and customer profiling technologies. This provides Amazon with customer information that used to be the preserve of very exclusive and personalized booksellers who knew their customers’ tastes and would make recommendations.

The Amazon system can recommend customers books or CDs based on their previous purchases. Ever wondered how Amazon is able to do this? These are some of the wonders brought about by technology, the basis of the next chapter.

Amazon has just turned profitable and it’s gross profits are approximately 30 percent of sales - not bad considering itis a dot.com (see Table 6.1 for its 2001 Annual Report). 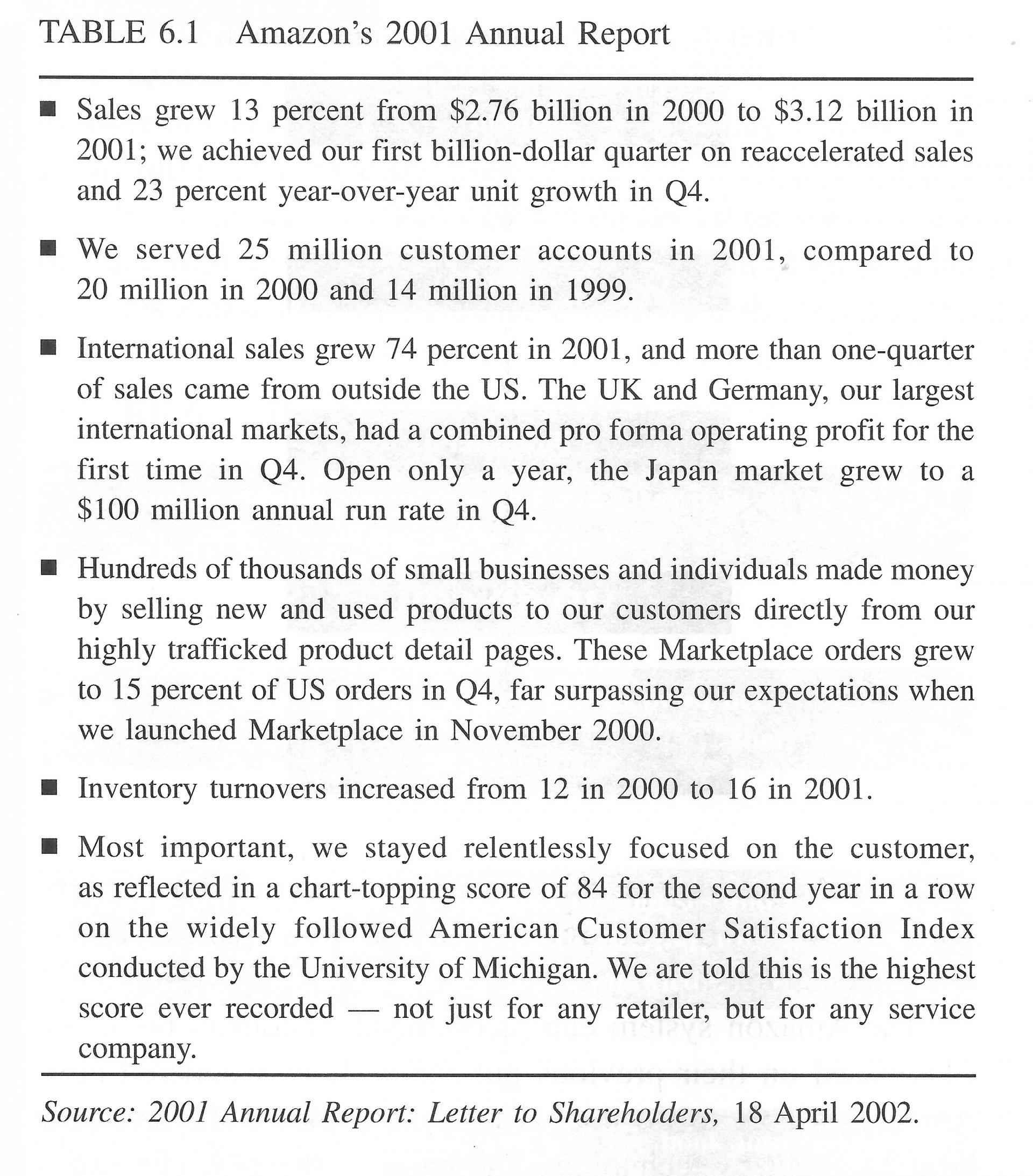 We can say that value is created when problems are solved, making efficient use of existing resources and that what creates value today may not do so tomorrow. It was once an important role for distributors and book shops. Technology changed this. And Amazon realized it.

The pace of modern life (fickleness of capital markets and consumer tastes, and the speed of innovation and technological change) means that companies have only a limited amount of time to profit and sell their wares before something better comes along.

No longer can a business or an individual sell, advertise or promote goods or services based on brand name alone. No longer can someone say, “This is good for you because it is the product approved by so-and-so.“

Having access to more information via the Internet has made buyers more discerning. They want to know how good the product is, vis-à-vis similar products, and how this product will improve their life. Price is not the only consideration. It is increasingly about satisfying their particular needs and wants, and the intrinsic perceived value that they attach to the goods or services.

In order to generate value, companies have to build, grow and outperform their competitors. The mind is the basis of value creation and employees should be encourage to creative knowledge workers. Companies need to create value in order to attract and retain the best employees. Values are in the form of salaries, bonuses, health insurance, job security and so on. The standard line, “Our people are our greatest asset“ has actually become true in a world where creative use of information and technology to build customer value is now the key to success.

The Wider Implications Of Value Creation

There is a strong correlation between technological advances and the betterment of human life.

For example, the Agricultural Revolution which occurred between 1750 and 1900 produced a transformation of human society brought about by the invention of the plough making large-scale agricultural production possible. There was widespread replacement of manual labor by machines during the Industrial Revolution that began in Britain also in the 18th century and is continuing in some parts of the world. In the long run the Industrial Revolution has brought economic improvement from most people in industrialized societies. Many enjoyed greater prosperity and improved health. Modern industrial life also provides a constantly changing flood of new goods and services, giving consumers more choices.

As technology just keeps on getting better, efficiency has reached the stage where little resources can create plenty. How about 60 years ago, 50 percent of the US population was involved in the agricultural sector. It was these agricultural workers who ensured food for everyone within the United States. This group has now shrunk to about 2% of the population but with the use of technology there is an even greater food surplus. This efficiency has created value.

Similarly, India, China, Russia and many other parts of the world are producing more and more goods as technology becomes more advanced. This surplus, however, is not matched by the demand.

It is the same with technology. Companies today have more technology that they can use and this level of utilization is a record low (see Figure 6.3). 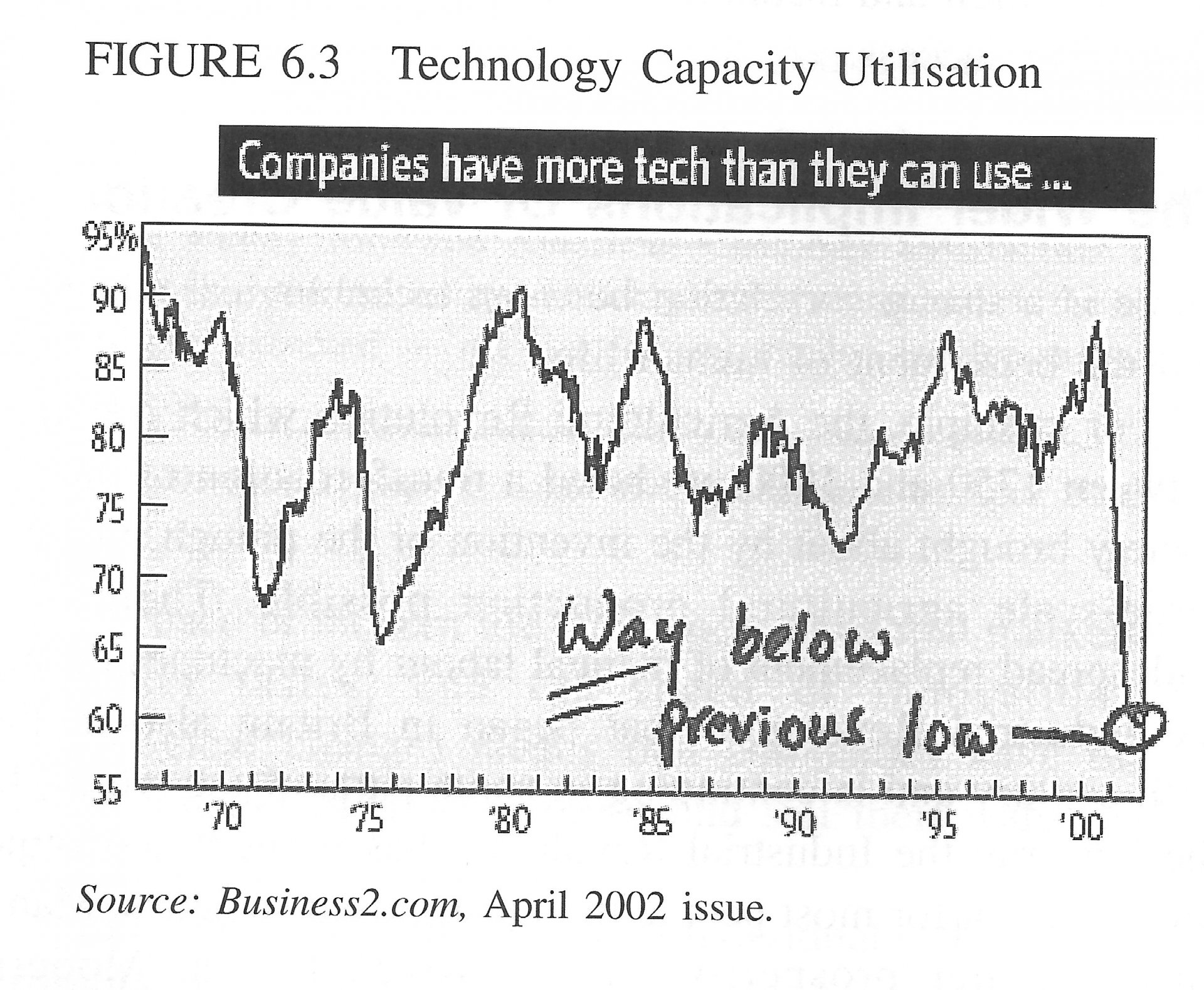 The dot.com collapse is important. It demonstrated the failure to separate fact from fallacy. It has brought about a situation where everyone has to become dynamic. It has made employees look for more than just attractive pay packages. Managers, even those in non-technical areas, must possess high-technology skills in order to promote it effective and efficient use. Lastly, the dot.com downturn has brought about a new level of fear that is turning around and creating real value.

It is the same fear that has made Singapore and Israel, strong and successful. Fear is good; even better when it creates value.

We have to figure out an efficient way to use the entire excess built up in the system. This will take time but the lessons learnt from the present downturn will ensure this happens. It is the technopreneur who has the opportunity to tap and offer, but first technology has to be de-mystified, the subject of the next chapter.

Technopreneurship Development - A Role for Society in Technopreneurship Development, a chapter written in 2002, explains the creative destructive forces at work in practically every aspect of human life and the reasoning for the massive confusion, leading up to revolutions, lack of employment opportunities and governments fiscal deficits. Technology is usually blamed for making the world a smaller place, the writing was on the wall since the late nineties, this chapter refreshes our memories.